I Wanna Be Tiny & Other Semi-Lesbian Musings

The other day I was looking at this girl (and by girl I mean 23 year old) and she was itty bitty.  Size 0 maybe?  And I was thinking: "Sigh, I wish I was TINY".

And then I felt myself say: "Self, you don't want to be TINY.  Your girlfriend likes a little meat and you like muscle and curves too.  You just want to be thinner and healthy."

Shut up self I said!

TINY!  That was what I wanted to be.  I mean, sure...it may not bring happiness but clothes shopping has to be easier right?  At least that?

So fine.  Maybe I don't want to be tiny...but it might be fun for a little while. 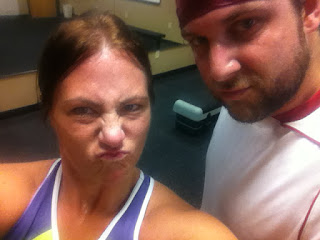 This is me and my friend Nathan post workout this morning.  I was in beast mode and it felt good.  (random)

My girlfriend is sick.  And I realize that those of you in life partnerships with men also suffer from the "big baby phenomenon" I am about to mention but I think, I think it's a tad bit worse with two women.  As mentioned before, Heather, bless her heart, is high maintenance.  I mean she may look all tough and strong, but do not be fooled friends.  She is more girly than I behind the scenes.

Case in point:  She cries at Grey's Anatomy more than I do.

But when she is sick, and by sick I mean a minor baby head cold...oh GOODNESS.  Sure as my name is Amy Irene Workman, she needs to be coddled and babied.  And don't get me wrong...I am all about coddling.  But it becomes tricky when I have a cold at the same time.  And by cold I mean, an "emotional cold" if you will.  Or in other words, I just need attention.  But I can't get babied or attention bc SHE needs babied and attention.

And listen...I hate to talk about things like politicos and religion...but...I am just going to say it.

There is a difference in brands of tampons.

Okay?  I am a pearl girl.  No cardboard applicators for this lady lilly.  No.  No janky little compact tampons neither.  But my girlfriend, who is cheap, buys whatever is the cheapest AFTER she uses all of my good tampons...

In other news, I also tried to play the "world is ending so we better DO IT tonight just in case" card.  But..yes...BECAUSE SHE IS SICK...she can't participate.  I told her that if the world ends at midnight she is going to be really sorry tomorrow.

Our kitty is still bringing in sweet furry moles into our house.  She gets them from the backyard, brings them through the doggie door and places them around the house.  For those of you who have never seen a mole in real life, this would be an example:

Precious.  That is not one of OUR moles...I tried to take a picture the other night but the little fellow wouldnt hold still.  Their eyes and ears are covered in fur, and they don't move real quick and they are softer than soft!  Luckily they are usually alive when I find them, so I can go free them to our backyard where they can continue to destroy it...but the other night I came home from work...unlocked the front door...and there were my three dogs and a mole...just walking around the living room.

Our house is a zoo.

Speaking of zoo...my family is in town.  Mother, father, brother...and my sister and nephew have been coming over every night...and my niece should get here Sunday.

Have I mentioned we have a tiny house, three fat dogs, one cat, and random moles?

I have been doing pretty good these last few days.  I haven't gone crazy dieting but havent gone crazy consuming either.

Tomorrow I have a few presents left to buy and stocking stuffers to purchase and then I should be ready for Christmas!

A New Day A New Diet

Listen kids, I keep it real with you don't I?  Well, pretty real.  I mean, I do have SOME boundaries (albeit very loose). So I don't want to come at you with "I am not on a diet, I am changing the way I eat for a lifetime" nonsense...bc let's be honest...when you aren't eating what you want because what you want to eat makes your ass fat and your stomach topple out and over the top of your pants...well then friends...you are on a diet.  NOW, maybe at one point, your diet does bc your habit and wah-lah, you have changed your lifestyle.  But I ain't there, and I don't know if I will ever be there.  So, let's look at what the definition of diet is, when one googles DIET.

1.The kinds of food that a person, animal, or community habitually eats. (one could say that I habitually make poor diet choices)

2.A legislative assembly in certain countries. (one could say I have no idea what this is referring to)

Restrict oneself to small amounts or special kinds of food in order to lose weight: "it is difficult to diet in a house full of cupcakes".

So there we go.  We are all on the same page now.  Well anyways, it would be safe to say that I have been firmly routed outside of the healthy eating stratosphere now for...gosh...a year?  I would say that with the exception of a few bouts of a one or two day stretch, I haven't really been trying to watch what I have been eating at all.  While I am not making positive food choices, I am constantly aware of how bad the choices I am making...are.  But just like the years of eating that got me to 333pounds, I can usually justify or squash those voices by eating more food.  Dangerous slope.  So I woke up and weighed in Monday.


I thought it might be a little inflated due to being on my period...but whatever.  I then went and got out my weight loss journal that I have had since 2000.  I used to record my weight EVERY Monday during my losing phase after post-op.  As you can see, I haven't recorded my weight since September. 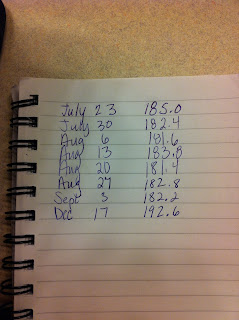 So I wrote it down and I also took my measurements.

And so we begin again.

Some of the behaviors I know I am going to have to remedy are:

Eating fast food.  When I was actively losing﻿, especially during the first year...I barely EVER ate fast food.  If I ate anything, it was Wendy's chili or Chik-fil-a nuggets.  Because of my loose restriction right now, it is pretty easy to eat fast food, where once upon a time post-band...eating a hamburger with bun while driving meant certain barfing either in my car or on the side of the road.  I didn't try it.  I didn't push the limits.  So...I need a fill soon to help my otherwise worthless brain by taking the fast food card off the table.

And that goes along with the fact that I need to resume drinking water on a regular basis.

ALSO, I remember...vaguely...when I would count my naughty items.  Like, oh I had ONE muffin today.  Or I ate three little tiny miniature tiny peanut butter cups.  Now, it's like I count containers.  I ate ONE BAG of peanut butter cups.  I need to try and regain awareness of the magnitude of my poor choices.

I need to set a weight loss goal and be held accountable.  I am signing up for the biggest loser at work on Jan. 3rd.    Heather runs the competition, it's a $10 buy-in, lasts for three months.  I did this about a year and a half ago and came in second.  It was the last time I weighed in the 160's.

I want to weigh 165 by May 18th...which is the day we run the Tough Mudder competition.  Taking 20+ pounds off my frame with certainly help my endurance and help with the obstacles where my big ass is hanging from things...

Heather said "It's about time you got back in check"...she's right.  She also said "Don't you think it's a bad week to start this diet?" Meaning with the family and holidays upon us...but I said it's better to start, even if I start slowly, than put it off.

It really boils down to eating healthy is NO FUN.  It's HARD WORK.  Shoveling food in my mouth mindlessly is FUN (while it's happening).  And it's EASY!  I don't wanna have to eat good (picture me stomping my food, lower lip out, brow furrowed).  But I think about my little sugarplum Heather...she is hard work and totally worth it.  And I also know I have done it before and CAN do it again.

So here's to all of us doing it again!  Or for those of you doing it the first time.  Happy Tuesday.  xoxo
Posted by Amy W. at Tuesday, December 18, 2012 9 comments

Do You Slobber A Lot?

I had the most brilliant thought today.  I don't really know if it is qualifies as a thought...more of a brain occurrence.

Years ago, my dentist told me that I produce a lot of slobber.  (Actually, he used the word saliva, but that word gives me the heebie-jeebies, so we will go with slobber).  Well today I was getting my teeth cleaned and the dental hygienist commented again about how much slobber I produce.  She said this to me while I was thinking about how I was STARVING and plotting my breakfast in my brain.

And then it happened.  Maybe I do INDEED slobber a lot because I am always thinking about food.  Very Pavlovian.  You know, Pavlov and his dogs?  How the dogs would salivate when he rang a bell and gave them food, and then he found they would salivate at the sound of the bell, not just the food, but because the bell triggered their thoughts about food?

I mean, this may be ground shaking, life changing.  Do you think that those of us who think of food all day produce more slobber?