We Are Always Running

I thought I would fire up the old laptop and blow the dust off of these keys.  Happy 2014 my friends.  Happy almost end of February 2014.  Can you believe it is almost March?  Before we know it, Christmas will be upon us again.  And even though I told Heather she killed Christmas, and we would no longer be celebrating due to her behavior this past Santa Holiday, everyone who is anyone knows that me giving up Christmas is complete reindeer shit and I will be hanging Christmas lights before we even eat our Thanksgiving Turkey.

Lord...I got off track quick.  You see, the thing about not blogging for months on end is that once you do return to blogging, your mind is just EXPLODING all over the page.

Where should I even begin?  Should I go chronologically? Should I go graphically?  Should I lead with my new boobies?  SO many ways to go.  I feel like this is one of those books from when we were little kids, when you go to the end of the chapter you could choose to go ahead to the next chapter for one ending, or jump to page 87 for a different ending.

I will save my boobies for another post, one in which I can post pictures...because afterall, what is  boobie post without pictures?  Which reminds me of a joke I saw the other day:  Without nipples, titties would be pointless.

So let me catch you up on my weight loss and my strivation (that could be a made up word) for athletic domination.

On January 3rd of this year, my company started a weight loss competition through a national program called Healthy Wages.  You form teams of 5, pay $70 each, and our thus enrolled in a weight loss competition with other businesses and their teams of 5 for 3 months.  Max you are allowed to lose is 16.6% per person. Anything else will not be counted because they don't want to promote unhealthy weight loss.  If you are the winning team at the end of the 3 months, your team wins $10,000.  I do not underestimate your skills as mathematicians, but that is $2000 for yours truly.

I mean...I rarely have any, but I can imagine I would like it.

So I signed up.  I weighed in at 185.6 on January 3rd.  That weight was thanks to a couple days of free eating, being laid up for 6 weeks thanks to the new girls, and several large bottles of water pre-weigh in.  To lose 16.6% I would/will need to lose 30 pounds.

The first month rocked.  As recommitment to losing usually does.  These last 2 weeks have been slower and smattered with a few poor food days here and there.  But I am on track.  If our team loses, it won't be my fault.  Let that be known.

So my current size at 166-168 pounds is a 10, with some 8's.  I have cut back on weight lifting just a tad and of course upped my cardio.  I am using myFitness pal to track everything I eat and every workout.  Annoying yes.  Helpful yes.  I gave up drinking until the competition is over.

So on the upping my cardio front, a couple of things happened.  For six weeks after my boob surgery I wasnt allowed to run.  The first day I was cleared for running, I doubled up on sports bras and set out.  I completed 3 miles, but had to walk several times.  It was rough.  But last weekend we ran our first half-marathon.  13.1 miles.  It took me 2 hours and 22 minutes.  I wanted it under 2 hours and 15 minutes, but there was a little snag, namely my girlfriend leaving me in the dust at mile 2, which was not part of the blame, and me plotting her death for the remaining 11.1 miles (okay...not death...but let me just say that 2 hours is a LONG time to do something you hate (running) when your partner has left you because of her ego and ability.  But I digress.  My point is...in less than 2 months...I made some good progress.  So if I can.  Anyone can.  Truly.

This is me crossing the finish line.  You see, since Heather finished 15 minutes before I did, she could at least take pictures. 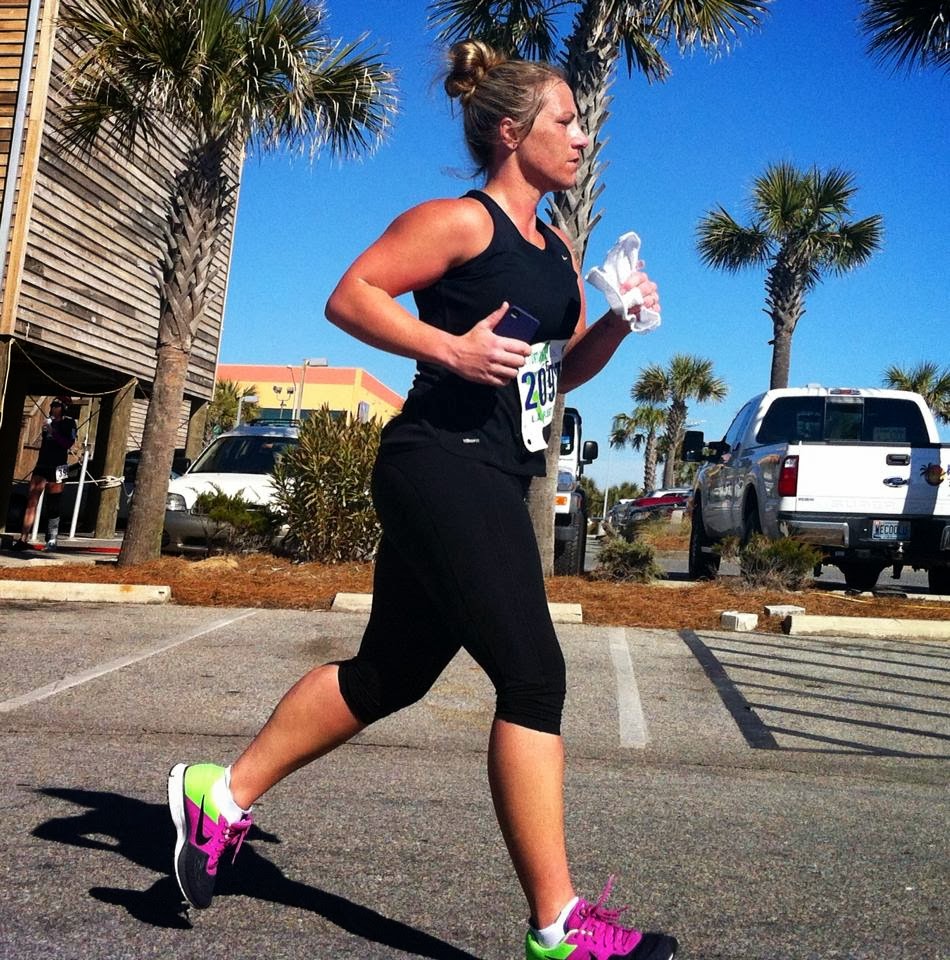 I don't usually wear all back when running, but I must say...it worked for me.  It makes me look a little slimmer than I am in reality.  But shoooot.  I will take it.
Over these last several months though, I have had some time to reflect on our weight.  And by "our" I mean women's (I do realize that there are a few random fella's that read the blog, but just read and nod boys, read and nod).
First, not being able to work out during my recovery time was enlightening.  It was scary at first.  And I missed it.  But I didn't gain any weight.  In fact, I lost a few.  What I lost was probably muscle mass, but it was reassuring and gave me a sense of peace that taking some time off wouldn't result in me ballooning back up.  My body was still working for me even when I wasn't working it.
Well then I was released for weights at 4 weeks.  And it was beautiful.  It felt so good.  I get so much from lifting.  And amazingly...I didn't notice a difference in the amount I could lift.  And that felt good as well.
But once I was released for running, it was go time.  We had the Pensacola Double Bridge run just one month out from my release.  That is 9.3 miles.  It would be our second year, and I wanted to beat my time from last year.  My time last year was 1 hour 52 minutes. 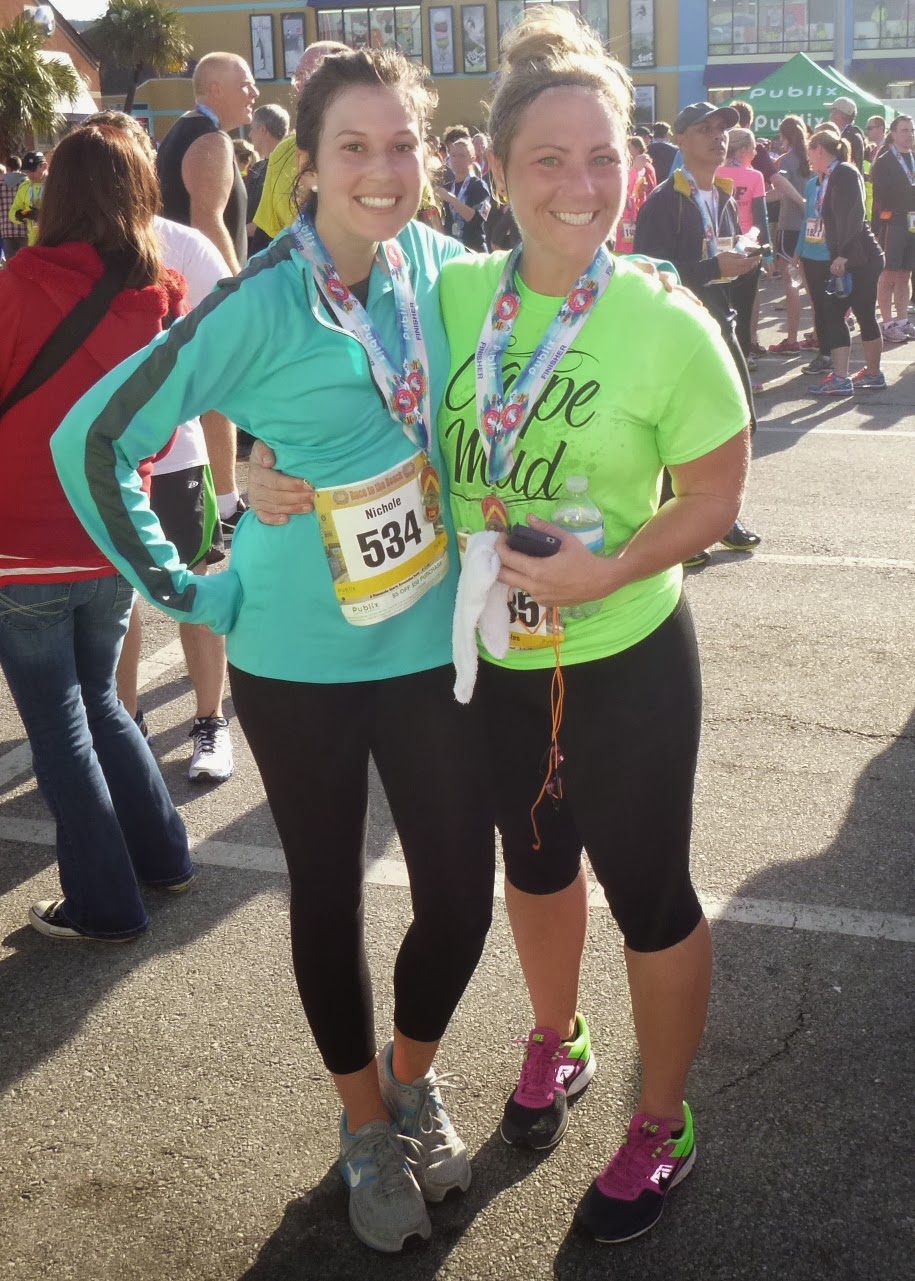 My friend and coworker Nichole. 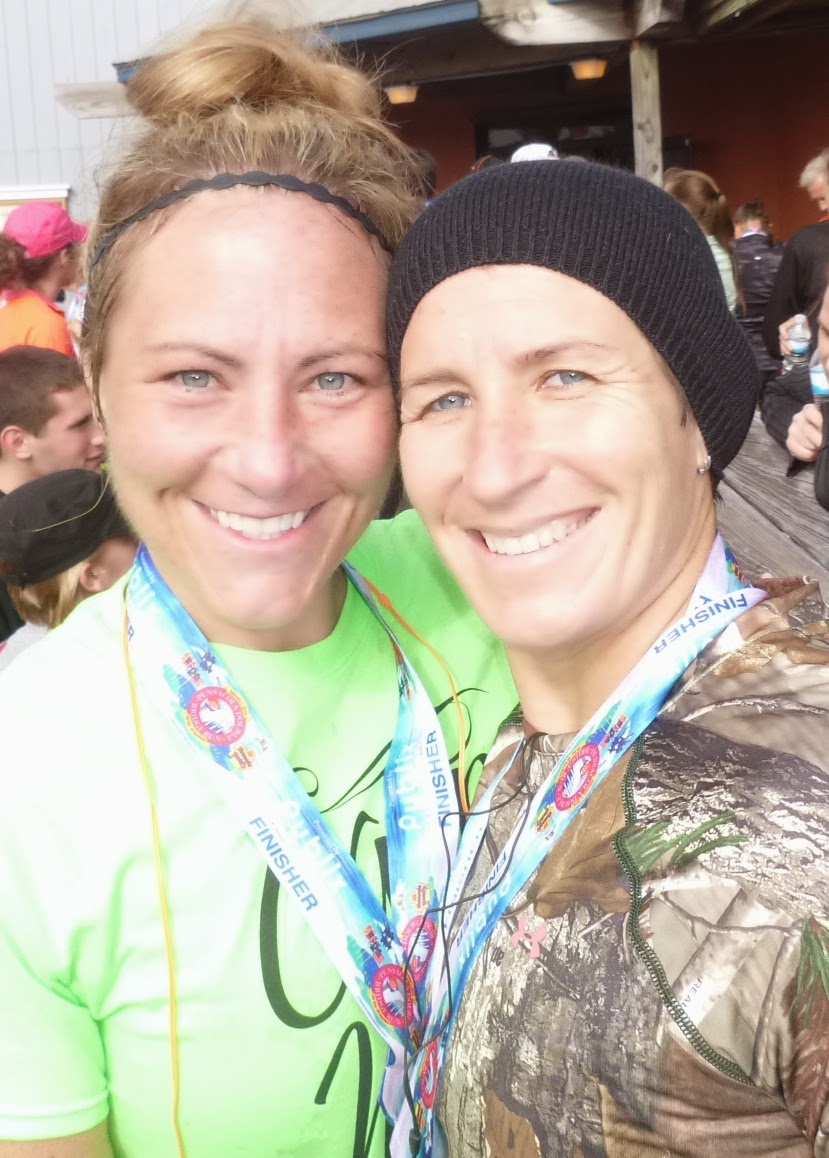 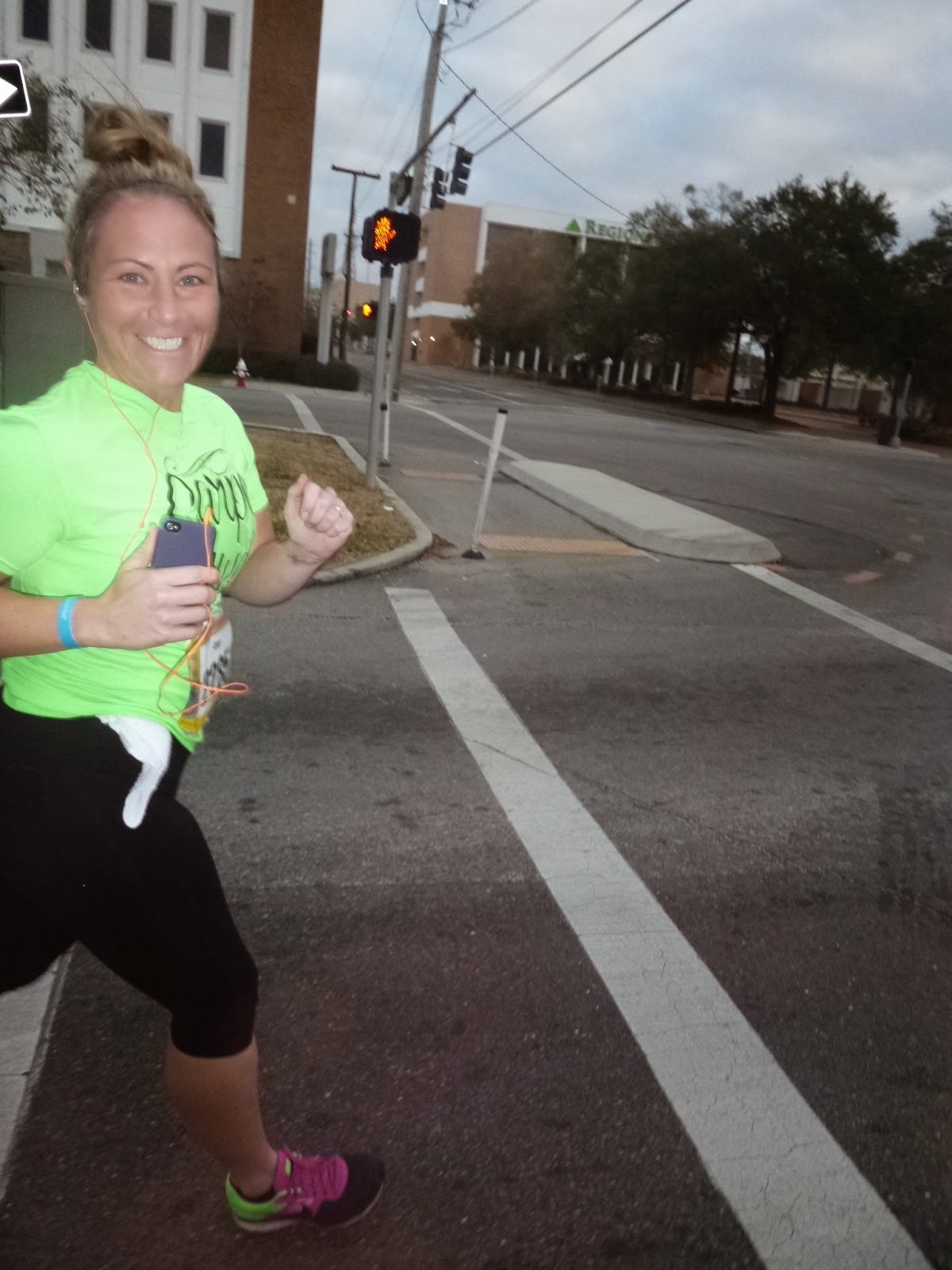 Somewhere around the first mile.
This year, I shaved 20 minutes off my time!  I finished in 1 hour and 32.  And what's even better, is...it felt GOOD.  I didnt ache.  I believed in myself.  I felt goood.
So good in fact that I signed us up for the half-marathon the next weekend.
But the other thing that I have been thinking on, and this isn't a groundbreaking revelation or anything, is how absurd it is that we place SO much importance on weight loss.
Whenever I get into the 160's, the compliments start rolling in.  People notice a difference and there is a lot of ego stroking.  And I dig it...don't get me wrong.  It's the fact that I love it so much, as so many of you do as well, that is also a little disturbing.  I don't think I place weight loss compliments above compliments on my public speaking, or on my characteristics as a friend or partner, but I guess it's because I get the weight loss compliments more right now than the others, it seems to be a little...much.  Because really, if I weigh 175 or 165...I am still me ya know?  It really just means that for that month or two I was able to "Diet"...well hell...any of us can do that for a month or so.
I think it's just important to remember, for all of us to remember, no matter where we are in a journey, the number on the scale doesn't determine our character or who we are.  It is a part of us...yes...but there are bigger parts...better parts.  Parts that will matter more long after we are gone.
﻿
﻿
﻿
Posted by Amy W. at Sunday, February 23, 2014 12 comments