Things That Make Me Want To Poop

So I have this eerie feeling that I have used that title for a blog post before.  Which, I suppose is wrong on some levels.

I registered for a 15k today.  Not like a $15,000 something or other, but a race.  Here in old Pensacola they have what is called the Double Bridge Run.  We have two big bridges that run from downtown Pensacola and end at Pensacola Beach...for a total of 9.3 miles.  People come from around the country to do this run.

First, there are like...REAL runners that will be doing this race.  You know the kind.  Real runner shoes, tiny little shorts, no shirts.

Second, there are thousands of people that do the race.

Third.  I may die.  The last bridge you run over is short, but basically straight up to the sky.

I decided to sign up though because I am going to tell you a secret.

There.  I said it.  Now I will never be able to be a real runner.  Maybe if I subscribe to Runner's World or something I can earn some points back...

But it's hard to find the motivation to run.  So if I pay for a race, if I set a goal, I know I will do it.  Mainly because I dont want the slow people bus to come and pick me up.  Seriously, there is a bus that comes and picks up the slow people.  Mama ain't getting on that bus.

It will be on February 2nd, so I have plenty of time to train.  I am actually confident that I can finish, but would like to do so in a good time and pace for my stubby little legs.  Heather is doing it as well, and I have recruited a few more people.  The Tough Mudder is in May, so this will be a good marker of progress.

Moving on to the next thing that makes me want to poop...

Well, I forgot what it was, but I have other things to share.

Did I tell you I blew up my car?  That one day, about 6 weeks ago, I was driving...doing about 40mph and then...nothing.  Car no workie anymore?  My coworker and a friend came and stood by me and protected me until the tow truck driver showed up.  Turns out...although the results aren't conclusive...the fact that I hadn't gotten an oil change in 18 months may have been bad for my vehicle.  The timing chain broke and bent some valvie thingies and thus my entire motor has to be replaced, and the car just aint worth that.  SO, now I am car shopping.  Which is exciting, minus the fact that I am poor.  I'll keep you posted.  Good thing is, Heather and I work together so carpooling is what we are doing.  Bad thing is, I like to drive Heather's truck to buy food and other things I can't live without from Target, like cardigans or toothbrushes....and Heather likes to yell at me for this.

Something big happened a few weeks ago.  I am a co-chair for the leadership development team for our hospital system.  We plan 3 yearly leadership conferences, where all the leaders...from our CEO to our managers attend...so about 450 people.  After years of wanting, I finally got the chance to emcee the event.  As most of you know, here are a couple of facts about Amy:

And some of you may not know, because I don't talk about work a lot on the blog, that one of the things I get to do from time to time is speak on leadership.  Over the course of this past year I have been lucky enough to speak in Nashville, Orlando, and several places in between.

But this gig was going to be BIG.  BECAUSE, our hospital system is known around the nation for being one of the best, and we have our own speaker's bureau that travels around and consults and speaks.  And if I could be anything when I grow up, besides a mermaid or an owner of a farm where people can board there animals...I want to be a motivational/inspirational speaker.

So I was all sorts of nervous leading up to that Friday.  I wanted to make sure I didn't say anything too inappropriate, didnt get myself fired, and didnt bring shame to my facility.  But, I also wanted to make sure that when I was done that day...people would know who I am...AND...I was hoping that the people from the speaker's bureau would want me.

Let me tell you.

It was the best I have ever been.  I was funny.  I relevant.  And I felt good.  My stories worked, people were laughing...

THEN...oh man it gets better.

I was famous.  People were finding me throughout the day hugging me.  Thanking me.  Telling me how wonderful I was.

It was like Amy Heaven....except there wasn't any chocolate waterfalls.

But seriously, it was a good day for me and as soon as I stepped off the stage after my opening, the people I was wanting to offer me a job, approached me.  I am not sure where it will lead.  Hopefully I will get to stay doing what I do, but travel once in awhile and speak for different organizations.  Regardless, it was professionally one of the best days of my life and helped me believe in my specialness a little more...which I know...after pumping myself up just a second ago may not sound necessary...

but one of my weaknesses that most people don't see is selling myself short.

So that's about it dudes.

Hope all is well.

While some of our favorite lapband (and lapbandless) bloggers were laughing and drinking and dancing...and who knows WHAT else in the windy city this weekend, I decided to crawl though bullshit.

And it was awesome.  This was the weekend of the Delta Dash over in Alabama.  About 14 of us, in all various shapes, sizes, and ages...loaded up and made it to Stockton.  We suited up in our shirts...slammed some caffeine...and posed for pictures.  We even made the Mobile Press Register. 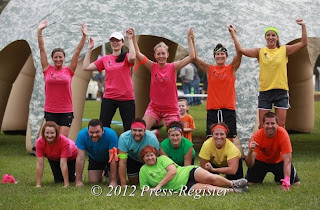 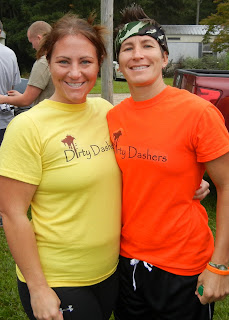 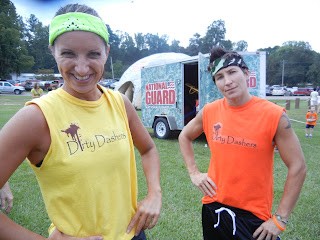 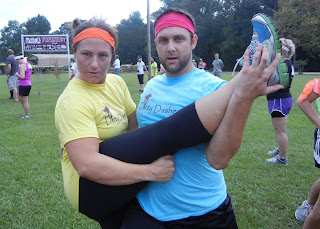 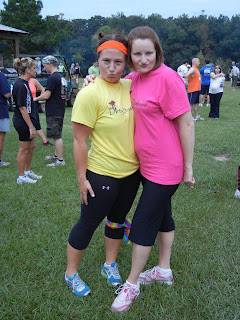 I know...we look very intimidating.  People were scared when they saw us coming.  I pooped about 3 times out of nervousness.  Not knowing what was ahead was the scariest part.

We lined up at the starting gate and I started yelling things about going for the cornucopia of weapons (you know...you got to get inside of people's heads).

Here is a quick recap of what the run consisted of. 3.7 miles of dashing (seriously...running up hill in the woods forever...that's what if felt like) sprinkled in with 14 obstacles. Our first obstacle was the monkey bars... 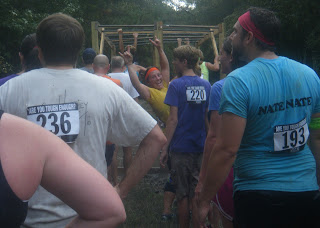 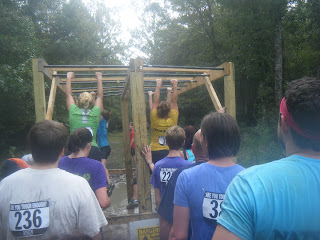 It was awesome.  Until I put my foot out to step off...and fell flat on my back.  Sweeeet.  Off I went. There were walls to climbs, creeks to run in...logs to carry and tires to flip. We had to crawl under barbed wire, in the blackest, stinkiest, "mud" ever.  I yelled at the guy in charge of that obstacle "IS THIS COW POOP"...he said "NO! It's BULLSHIT"...and for real.  I believe him.  He also told me to "keep my ass down" so it didnt get caught in the barbs...to which I replied "This is as down as it gets sir.  It has a life of it's own"!

At some point I caught up with Heather and Filthy Phil. 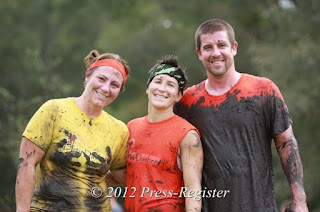 It took me about 20-30 minutes to catch up with them.  The majority of the time I was running alone...the rest of our team was somewhere behind us.  Eventually Heather and I left Phil.  The last sprint to the finish line consisted of a run through a creek...of what I would estimate to be half a mile.  It was the end of me.  I wanted to lay face down and drink the muddy creek water.  Mama was spent.  But my girlfriend...now how sweet is this...who was running about 10 feet in front of me, open her hand and stretched it behind her...towards me.

She wanted to hold me hand.

She wanted to finish together.  SO I mustered up the rest of what I had and grabbed her hand and we finished with an uphill run, jumped over some hay bales, and called it a race.

It was a blast.

I am so proud of all of us.  "The other Heather" from Defuniak, also known as Sharika Jingles...she had never done any race of any kind...and after only a few weeks of running...finished strong. BoobSweat, real name Natalie (posing in the yellow shirt with Heather above), faceplanted the incline climb and had her hair dressser pull a splinter from her jaw several days later.

It was a challenge for sure.  It also illustrated that we better really start training for the Tough Mudder in May bc if 3.7 miles and some hillbilly obstacles whooped our asses...10-12 miles surely will do the job.