Things You May (or may not) Like to Know

1.  At least 2 times a day I utter the words:  "I'm starving and I am pretty sure I am dying".  I text people.  I tell coworkers.  I just say it outloud in the bathroom.  And I KNOW I am not supposed to say "I am starving", because most of us are actually NEVER starving and there ARE people who are starving and it's a bit dramatic.  But I say it.  And I don't think I will be stopping anytime soon.

2.  I am the gassiest in the mornings.  Sometimes when Heather and I are on the cardio machines at the gym and my preworkout has kicked in (which means I need to use the bathroom for poopie time) but I don't want to get off the ARC until my time is up...I let a little stinker slip.  And then I keep looking forward, waiting for Heather to turn and look at me in disgust.

And I just shrug and giggle.

3.  I hate it when Heather rubs her socked feet on my legs.  And I know you aren't supposed to say HATE, but I am not joking.  Something immediately happens in my body and I want to throat punch her.  So far.  I have not.  She has been warned though.  But she often does not heed my warnings and thinks it is fun to then, like a child, repeatedly try to rub her socked foot on me.

4.  I don't eat raw vegetables.  Never have.  Don't really see it happening anytime soon.  I do like steamed veggies...but I steam them until near mush.  Now you know.

5.  I like to say I'm half-gay because it sounds more clever than bi-sexual.  Really I am just an equal opportunity lover.  Although in "real life" (i.e. not taking into account movies, sports figures, or people I stalk follow on Instagram) Heather is the only female I have ever fallen head over heels for. Except that one time when I was a camp counselor.  But my love was unrequited.  So it doesn't count.  People like to ask "So would you go back to men"...well I don't intend to "go back" anywhere, but for me, I fall in love with a person.  Not their parts.  But...if they are hot...well that DOES help.

6.  Speaking of gay things, a coworker asked me yesterday why I wasn't "butch", prefaced with "you don't look like a lesbian.  She wasn't being hateful.  She has just lived, I am going to assume, a sheltered life over the course of her 50 plus years hear on Earth.  I immediately said to her "well, why don't you have long hair and wear lipstick"...and she said "I don't like it"...well there you go.  I was going to go on a tangent about the Kinsey Scale (if you've never seen the movie Kinsey, it's not bad) and about how we are all on a scale that ranges from "totally gay" to "totally straight" (probably not the official terms)...and then I would have highlighted some points from number five (see number 5 above if you have forgotten), but we were interrupted.

7.  ANOTHER thing someone said to me today was "it just drives me crazy all these big girls on the beach wearing bikinis"...and this wasn't from a skinny girl.  I quickly said," Oh, I wore bikinis at 300 pounds.  I wasn't going to let someone's judgment stop me".  Let's take a look at me here in my one piece... 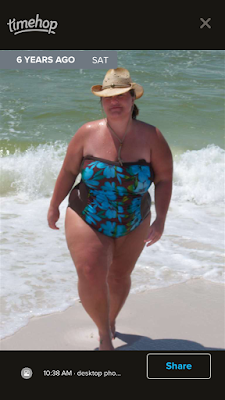 Oh the joys of timehop.  Now granted, I was probably around 280ish here...but I promise you I thought I was a sex kitten.  Meow.

8.  About a month ago now I took an afternoon off at work and went to the beach and met me sister from another mister there... 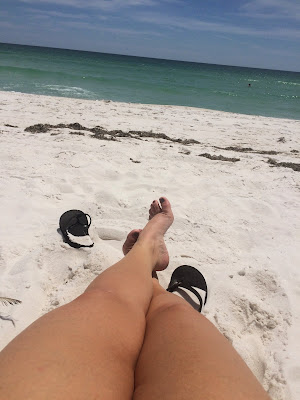 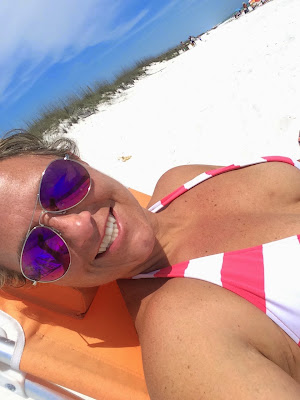 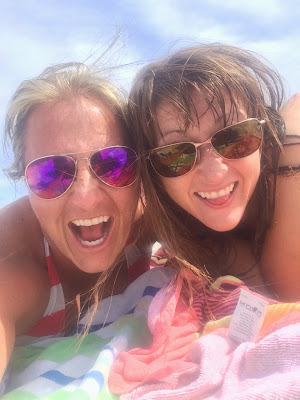 It was lovely.  We've decided we would like to be ladies who lunch...but are partnered with fine lovers with small bank accounts instead of ugly lovers with fat wallets.  FINE.  FINE.  So work we must.  But it was still a wonderful day.  I may or may not have consumed an excessive amount of Wild Blues (my favorite beer, 8% alcohol, and by excessive I mean 5) in about 3 hours and may or may not have swore of drinking for the rest of my life (I came to my senses about that silly idea after I started feeling better).

9.  I finished reading this book yesterday. 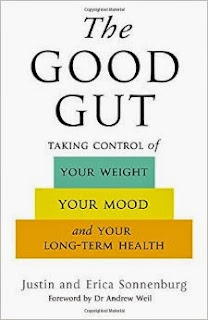 Sigh.  Don't do it.  Let me sum it up for you.  We have bacteria in our intestines that studies are being to show may be linked to everything from anxiety to obesity.  But, because they are still in the early stages of research, pretty much everything "may or may not be true"...but just to make sure, eat lots of veggies, eat lots of fiber, eat less meat, and find a good probiotic. 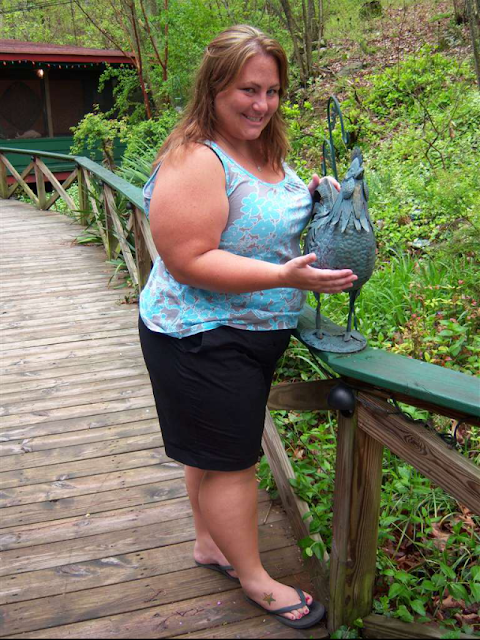 Came across this little diddy yesterday.  This was post-op I believe, but at least 7 years ago.  I don't know why I am petting a rooster.  Oh...I DO know why...but I am a lady so I will let you put the pieces together.

11.  I have decided I need to quit my job and become a selfie adviser. ON THE DAILY, usually right after uttering "I am starving and may be dying", I come across a friends picture on facebook that they have decided to make their profile picture.  And it's not just ONE person.  And this phenomenon knows no race, gender, age, or sexual orientation...but sometimes people on my Facebook take the WORST pictures of themselves, like an upshot that emphasis their chins, or a shot with a flash that makes their make-up look all Memoirs of a Geisha, which would be fine if they were actually dressing up as a geisha, but it just happens to be a Friday night on the way to the club....but I want to advise people...either in person while the selfie is actually happening, or maybe I will create an app that for .99cents a month, before your selfie posts, it comes to me for approval.  Of course, by putting this GENIUS idea out on the world wide web, clearly run the risk of this idea being snatched from me, much like the idea of the She-wee. 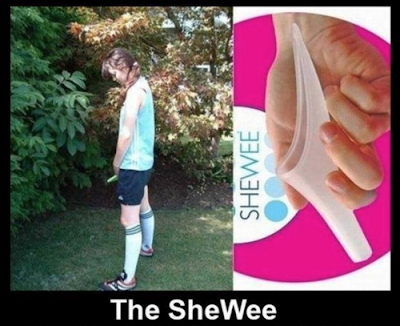