I'll Just Be Over Here...Putting out Fires

So yesterday at work I got to play dress up.  I was watching some Firefighter applicants do the physical test and once they finished...well...they asked me if I wanted to give it a try.  Now, clearly I had been mentally running with the young strong gentleman applicants in my head thinking "Oh..I could KILL this"...so once Brock asked me if I wanted to give a try...I had to say yes.

So, they suited me up in a jacket and helmet and walked me to the starting line.  I can't tell you what a trip the adrenaline running through my body was.  Even though I had watched 10 guys run this over the last hour, I didn't really know what to expect.  My body was shaking.  I was now thinking instead of ME killing the course, the course may kill me.

I started with a firehouse filled with water.  I had to run with it down the parking lot.

Then...came a terrible terrible thing.  It involved a sledgehammer and a "sled". Please see the picture below for an idea of what it looks like (that is not me mmmkay). 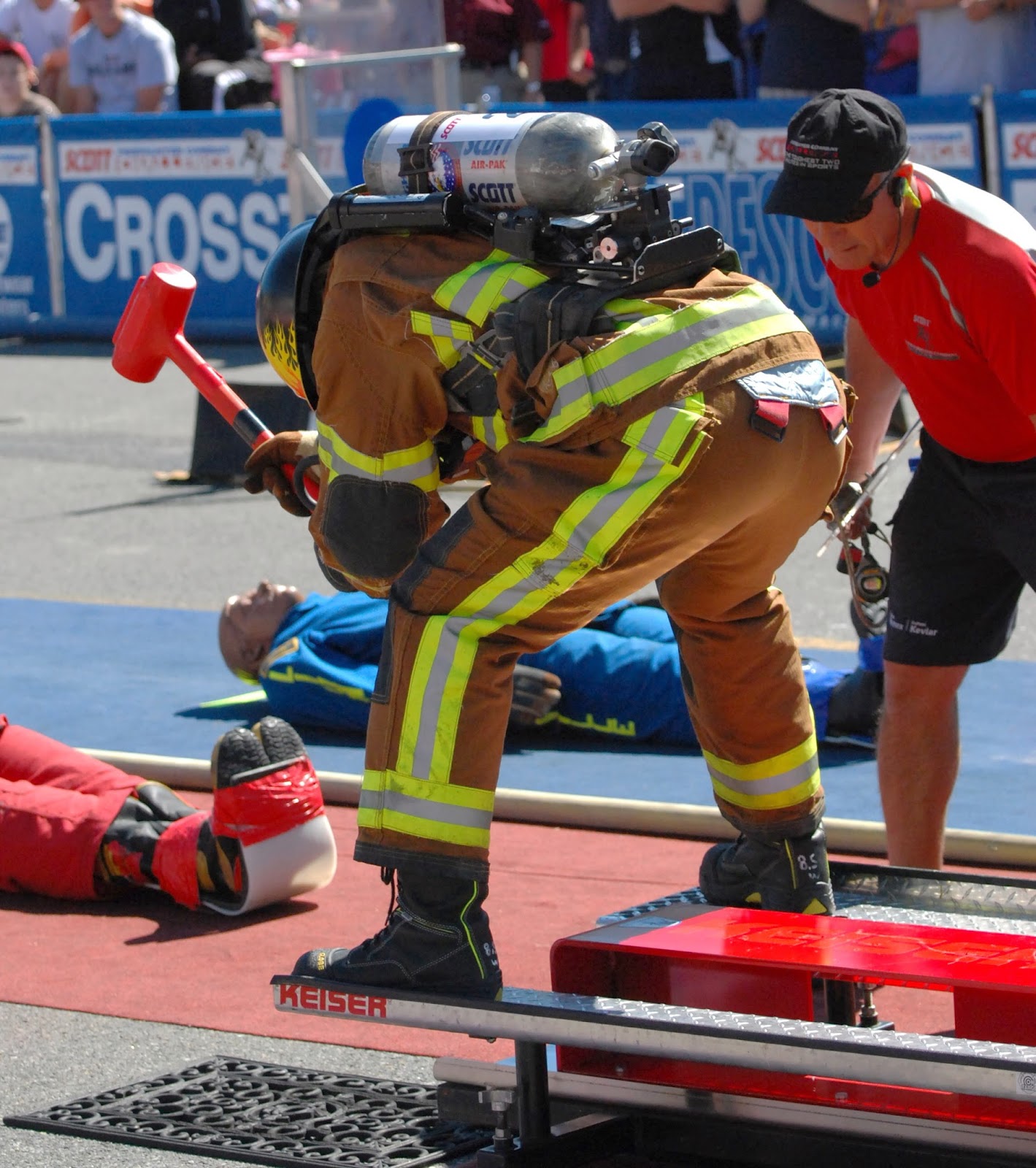 Well, you have to hit that red sled over and over again until you move it six feet.  I thought I could handle this without any problem. I WORKOUT EVERY DAY!  Well Brock warned me that it's all about technique...and that I should keep my feet in front of the sled (see the pic?).  I had to move that sled in under 47 seconds.  I started whacking the shit out of it.  It was a DISASTER!  Words were coming out of my mouth that no HR professional should speak in front of their people.  I moved it six feet.  But not under 47 seconds.  My entire body was shot.

But not to worry friends.  They didn't let me quit.  They made me keep going.  I do believe the firefighters enjoyed my demise (in a sweet  kind of way).

So next up was the hose carry.  I had to climb three flights of stairs with that hose. 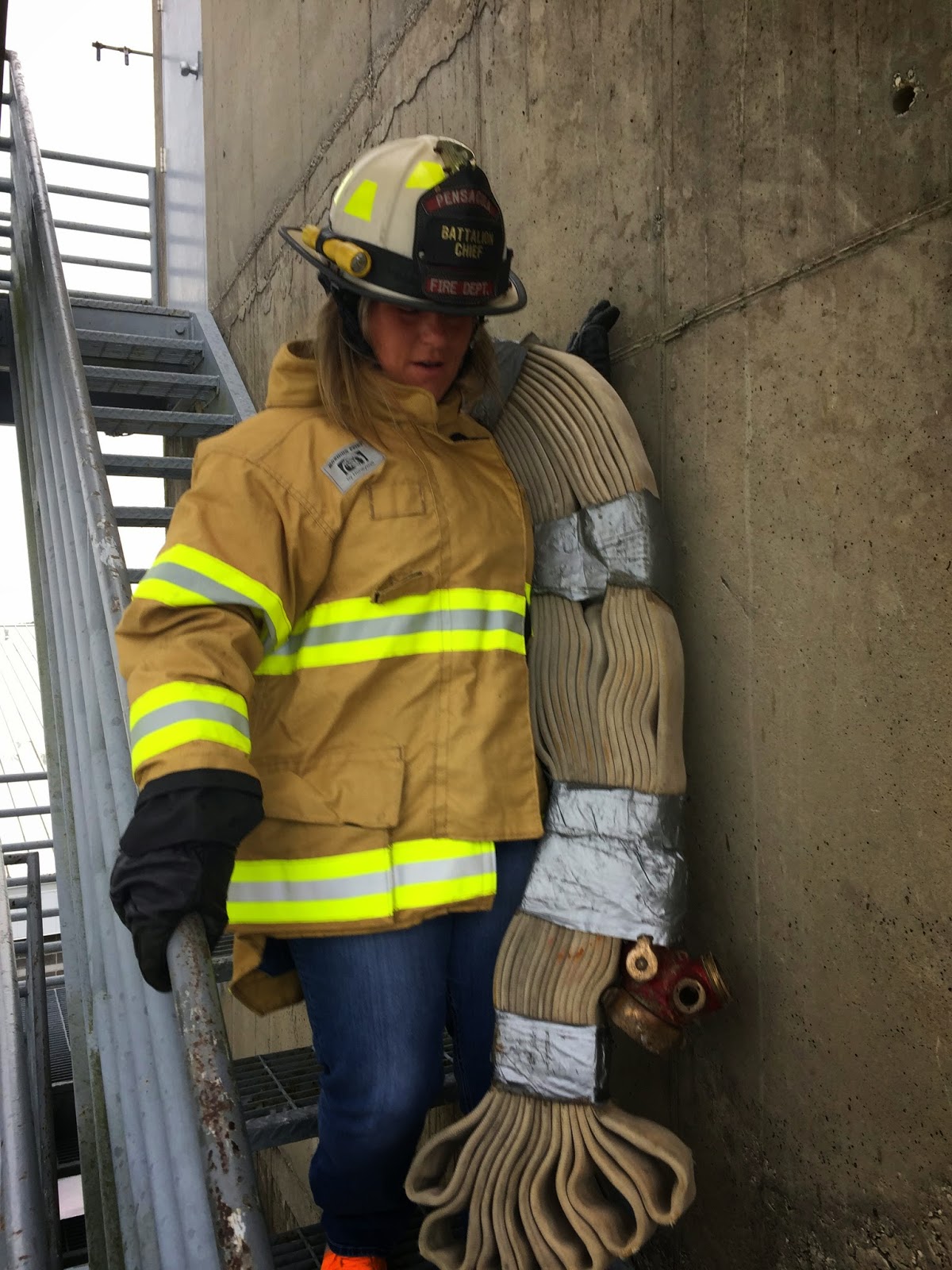 But once at the top, I had to pull another fire hose that was wrapped up at the end of the rope.  I had to pull it up three stories. At first, I used my ass to counterweight...but when you get the big ball of hose to the top, you have to reach over and pull it over the rail.

They were yelling, "YOU CAN".

I ripped my huge borrowed man gloves off...and I did. 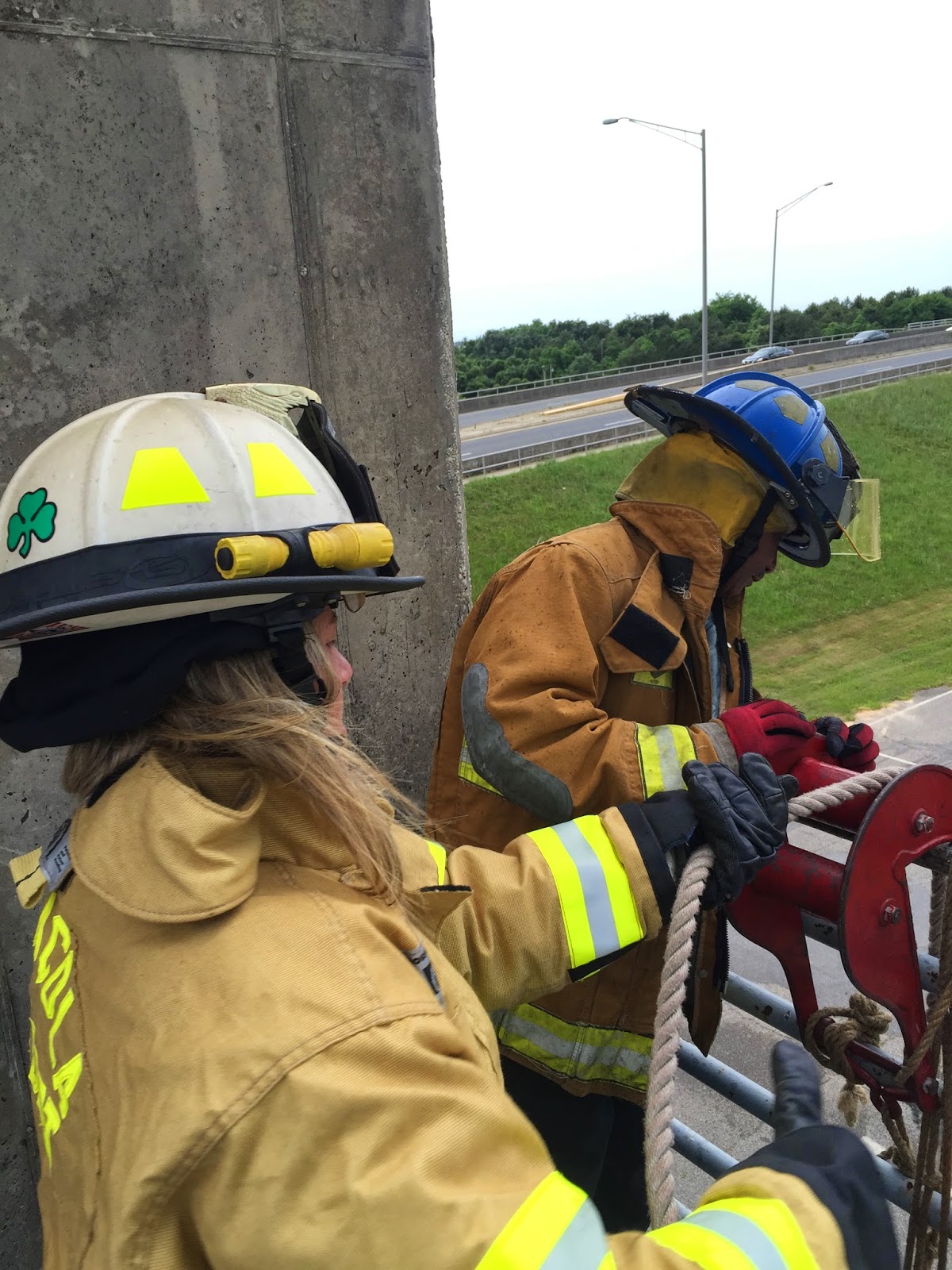 Back down I went.  Carrying the hose. 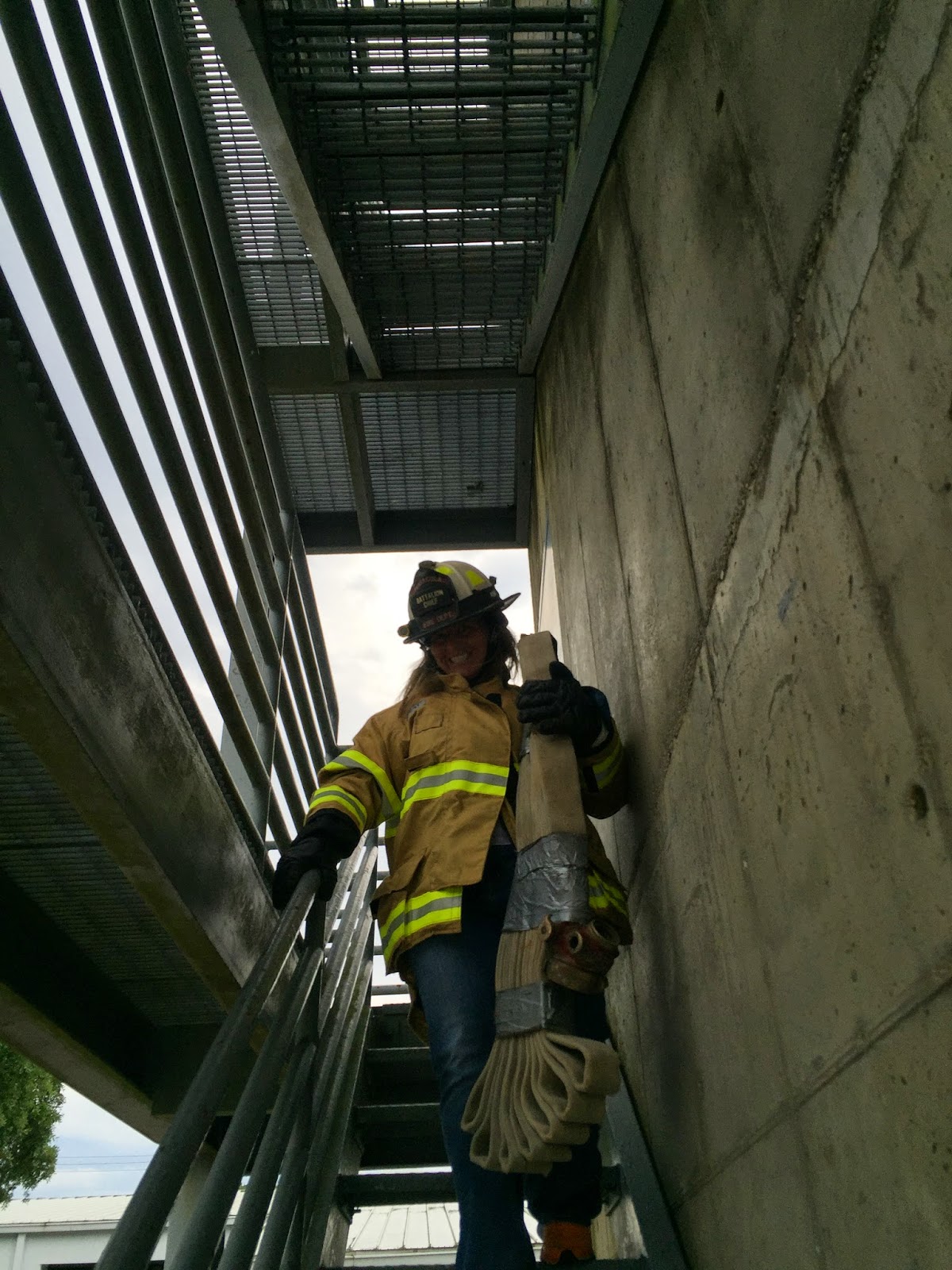 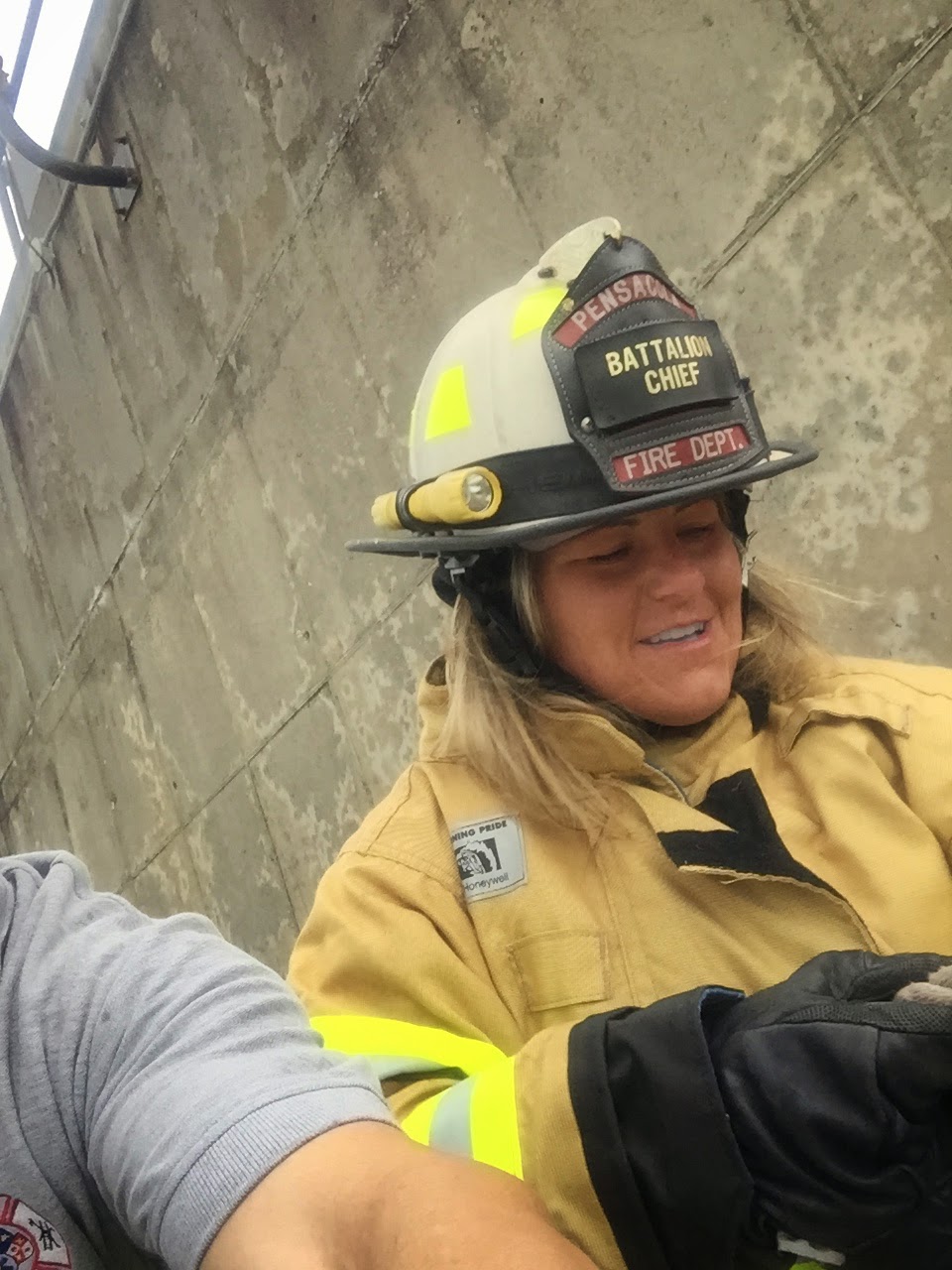 Once I got back down, I had to drag...or attempt to drag that damn dummy.  It must have weighed 973 pounds.

Okay.  It weighed around 170, but sweet shit on fire, I could barely budge him.  And his pants were falling down.  I was distracted.  I did manage to drag is fat ass some feet before I nearly died. 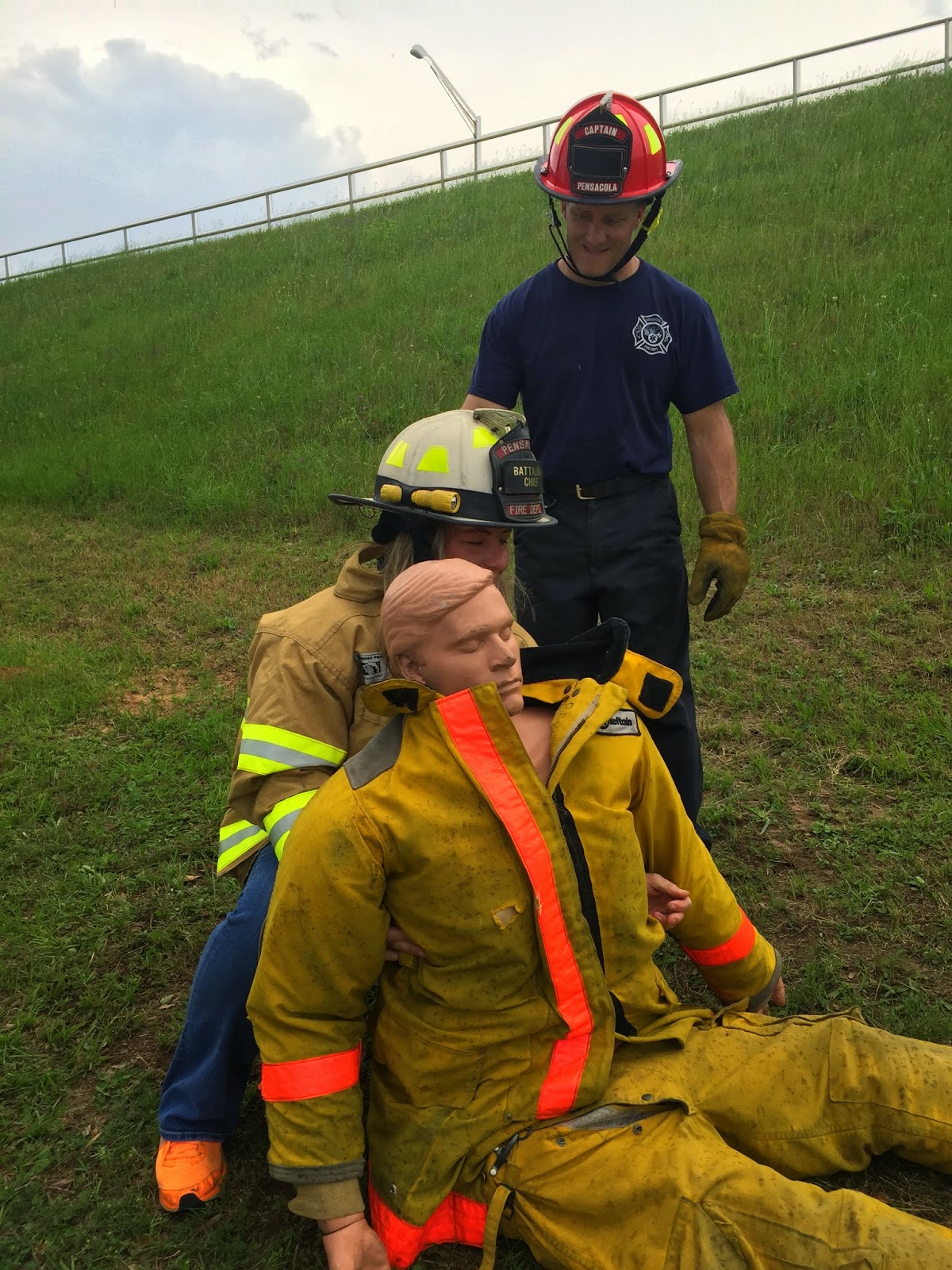 It was super tough dude.  And it all made me feel weak.  I kept muttering "I work out.  I work out".  But seriously, it was an awesome opportunity.  Those are some great guys.

And seriously...about 5 minutes after I finished and while Brock was coaching me on how the sled was really all technique...

I started feeling a rumbling in the bowels.

Turns out all that adrenaline and stress and physical exertion was about to explode out of me.

I left in a rush, shouting thank you's as I drove off.  I made it one block to the nearest gas station and their lovely bathroom.