And that chubby little lovemuffin is probably going to bring delicious foods, copious amounts of drinking, and my family to my doorstep!  I love Christmas.

That's really neither here nor there though.  SO many things have happened since last blogging...so let us look back and catch up together okay?

First, I wrecked my car. 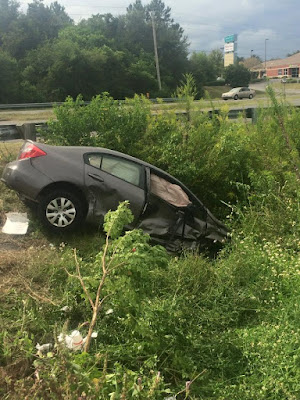 It was super scary.  I haven't been in an accident since 2003, and that was when I was young and had a tendancy to tap the back of people's cars when I wasn't paying attention.  This was my first real wreck.  I was crossing traffic and this guy t-boned me.  I spun around and ended up in this ditch in front of Publix.  His car landed upside down next to mine.  We both only had minor scrapes.  Our cars were totaled.  We were both super lucky and both wearing seatbelts.  About a week later there was another wreck at this spot...but the lady didn't make it.  Do you want to know what flashed in front of my eyes as I was spinning?  It wasn't a quick recap of memorable life moments like in the movies.  All I kept repeating was "Heather is going to be so mad at me, Heather is going to be so mad at me".

Once my car landed I thought it was on fire (just the powder from the airbags), and I couldn't open my door because it was wedged against the embankment.  So I immediatly thought of all the ABC specials I have watched about how to escape from your vehicle if you are about to die, and I managed to crawl out the back door.  Heather was actually on the way to see her Grandpa about 80 miles away, and I was making a quick drop off at Goodwill before planning on heading home to color in my adult coloring book and drink and nap....so our friend Natalie and my sister were my first responders.  Long story short, that 5-star safety rating on my Honda Civic was worth it, and I now have this precious little girl... 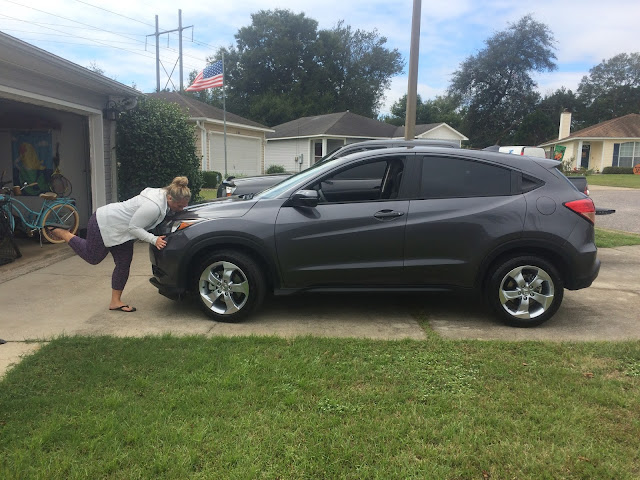 I have retired from kickball and started bowling.  Bowling is so much better because there is no yelling, no potential fist fights, you get to dress up on theme nights, and there is pizza. 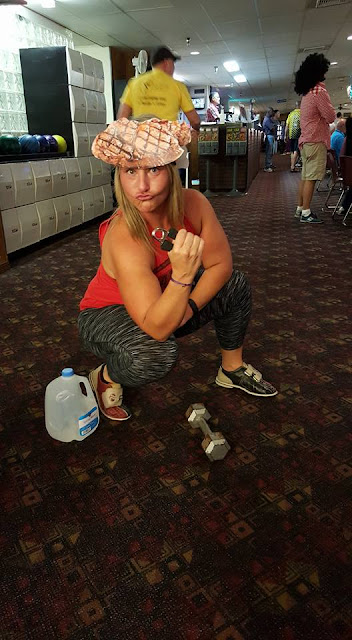 And this was crazy sock night. 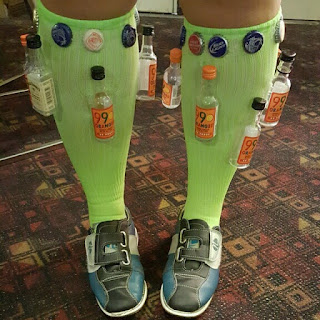 I call these my drinking socks.  I did however make the mistake of taking my glue gun to the bowling alley with me, in case any of my bottles fell off...which one did.  I hot glued it back on.  And thus...the hot glue seeped through my socks and I will forever have a dime sized scar to remind me of the perils of gluing while intoxicated. 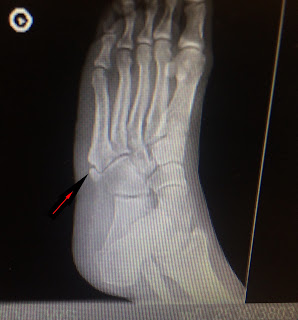 I also finally went to the doctor to find out what was wrong with my foot.  I was pretty sure I did something bad to it in February during a 9 mile road race...but I didn't want to hear about it and something always hurts anyways...so what's the big deal.  But after the bump on the side of my foot kept getting bigger, and after the shoe lady at the shoe store said she didn't want to sell me running shoes until I had it looked at...turns out it's a little bit broken.  BUT, it is apparently a hard spot to heal after surgery, so they gave me this magic little machine that I supposed to wear for 20 minutes a day and it MIGHT cause my bone to rejinerate (and maybe a unicorn will give me a ride to work).  If it doesn't work, we might do surgery.  But the doctor said no restrictions, not boot.  He said if I do something that hurts...don't do that anymore.  Duh. 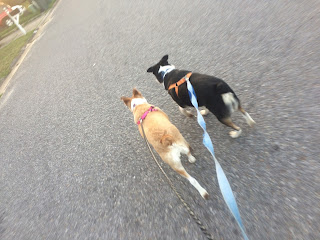 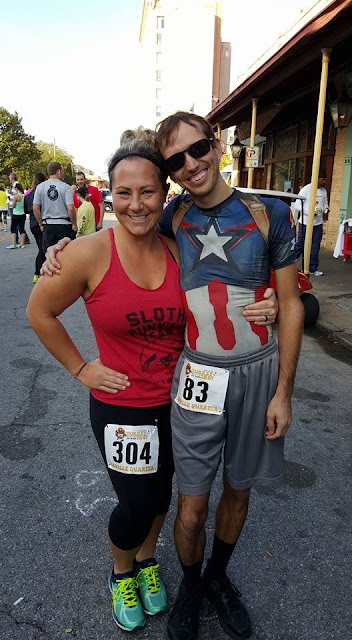 So I have been taking it easy and only ran once for a little mud run.  But Tough Mudder is coming back to Pensacola in April so I have to at least stay midly conditioned, so I laced up my wogging shoes and harnessed the pups and we have been running a little bit.   I did a 5k this weekend with Rachel, Jon Jon, and my partner for a day Beau Beau.  36 minutes.  Not too shabby for a 190 pound 36 year old woman with a broke foot.  My best 5k ever was a 28 minuter.  I don't think I will ever see that again...basically because I don't have enough want-to.  And I'm old.  And shit hurts okay? 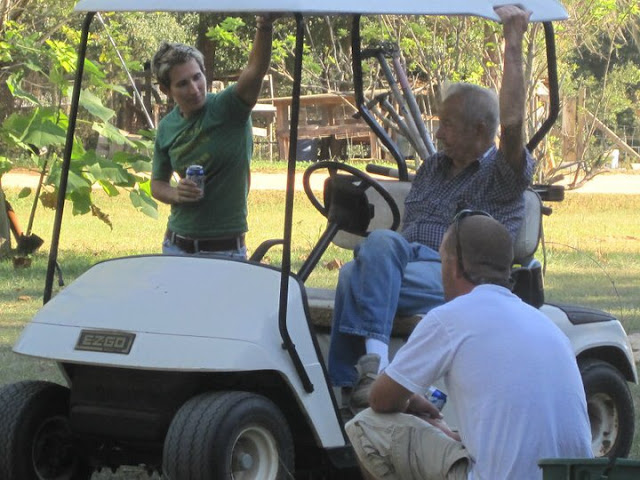 Heather's grandpa passed away last month.  It was hard because Grandpa was the head of their family and sweet in his old age.  But the Gainey's made it through.  We will be going up there in a few days for Thanksgiving and I am going to help Granny with the spread.  I always bring a few Workman food items like green bean casserole and hashbrown casserole, and they always look at both dishes like it's from Planet Mars...but that's okay. 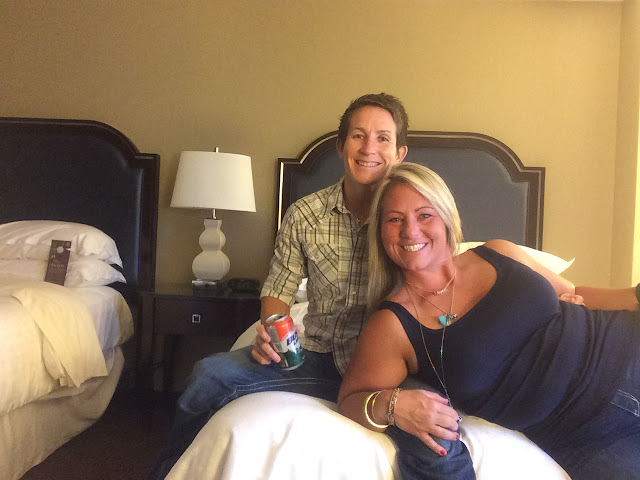 We went to New Orleans for a night last month.  Kacey Musgraves was playing at a bar and I really like her.  It was hot as balls and we are all old...so we were in bed by 11pm.  Sad...but true. 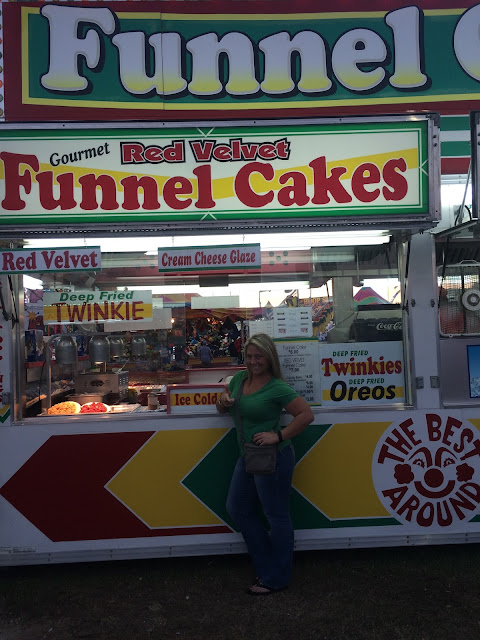 The fair came to town and Rachel and I walked (it's about .75 miles from our house) to that glorious event.  We loves some fair...and fair food....and scary fair rides.  First stop was funnel cakes.  I flirted with the odd funnel cake man and he whipped us up a fresh cake with lots of powdered sugar.  It was wonderful. 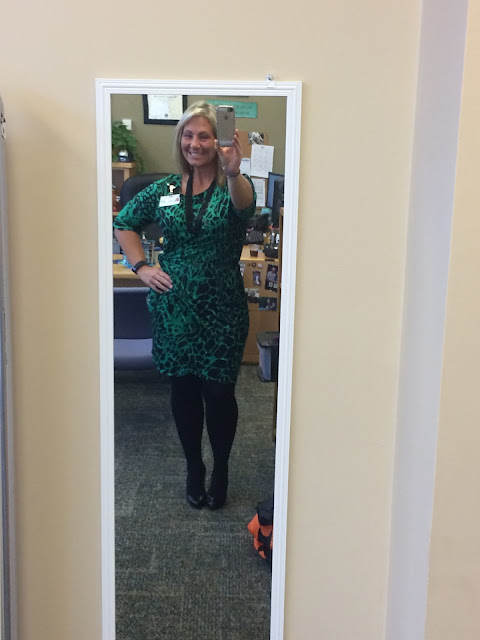 This dress was free...I'm not sure what's wrong with my face...but the other Heather Gainey (Sharika. is her nickname, she is Heather's cousins wife, you have met her before) gave it to me. It's a faux wrap dress.  And those are power spanx tights.  They make everything better. Except for breathing.  And peeing. 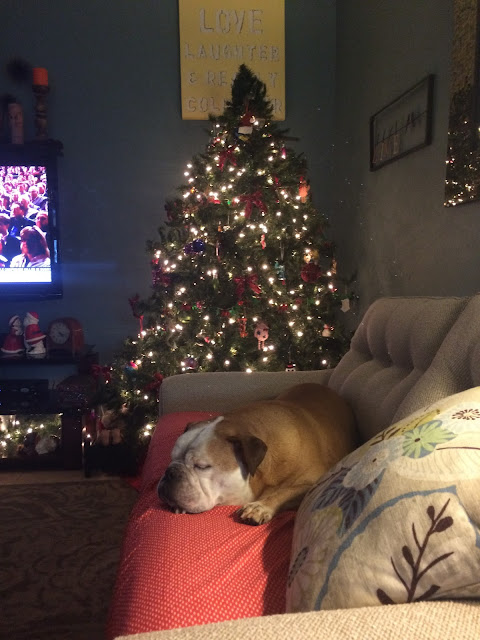 And lastly...tis the season.  This year is the first year the tree is in the living room.  Usually it's in the little strange area behind our living room.  Honey Mae is very excited as you can see.  I love Christmas.

And finally...the wedding is fast approaching.  1.16.16!  We are down to the smaller details and I am excited and nervous and ready for it to be here!  I will post more about that soon.

Until then...and hopefully then is not as long as it's been since my last post...love and kisses.